MPI’s chairman emeritus & managing director Harry (Hal) Curtis set out on a journey in May to hike the entire Appalachian Trail. For background on Hal’s trek and the cause he is supporting, read this MPI blog article. 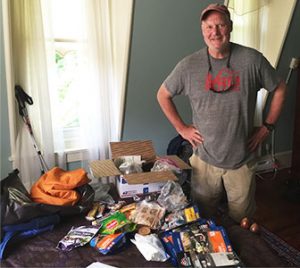 On May 26, Hal Curtis rolled into the quaint little river town of Delaware Water Gap – 16 days into his six-month-long, 2,200-mile Appalachian Trail hike. The lure of a real bed and shower prompted a late-day decision to forego his usual tent-pitching routine and instead make a run for it, resulting in an 18+ mile day.

His late-day charge began at Sunfish Pond, a 44 acre glacial lake perched on the Kittatinny Ridge, where he followed the trail several miles down an elevation drop of over 1,000 feet until it emerged from the woods onto a pedestrian walkway along the tractor-trailer laden Route 80 Delaware River toll bridge. From there, it was a left turn into this small town where he finally unloaded his 40 pound backpack and climbed to the fourth story of the charming—if not slightly askew—Deer Head Inn, a B&B of sorts that features rocking chair porches, creaky stairs and a quintessential jazz club.

Hal’s journey is clearly for more than personal amusement or ambition, which probably wore off after Day 2 or 3. His hike is for a cause – to honor the memory of his mother and to raise funds for the Lillian Prince Margolis Charitable Care Fund, which will provide financial assistance to patients of the Merrimack Valley Hospice, where she volunteered for 17 years.

We met Hal the next morning, an arrangement we made after learning of his planned arrival in The Gap – the closest his journey would come to our location. A little scruffier and stiffer than the man that set off 16 days ago, he looked no worse for wear and actually had a certain leathery woodsman glow. We admired the food contents of his backpack, which were sprawled out over his bed for inventory: made-ready-to-eat meals (MREs), oatmeal packets, granola bars, beef jerky and dried fruits. 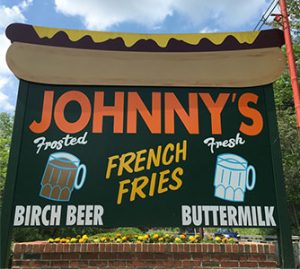 While indulging him with a few root beers and “dogs with the works” at a nearby MPI favorite – Hot Dog Johnny’s – Hal recounted the perils of finding water, lurking bears (which he happily slept through) and getting lost a time or two when the trail markings were not maintained. On the drive back, after restocking supplies at a local food store, he considered a few lessons learned from The Trail, which he imparted to us:

#2 – Always leave yourself an out (especially if you disregard #1)

#3 – Don’t ever pass up potable water

In hindsight, Hal was probably relieved that he made (and survived) his previous night’s charge, but he clearly intended to avoid a repeat. But it was a scorching 90 degrees on this “zero mile” rest day, and I sensed that #3 would quickly become the #1 priority as the heat wave—and summer—rolled in.

After we dropped Hal off back at the creaky jazz inn, the “Maine to Georgia” Appalachian Trail sign cattycorner from the hotel got the best of my curiosity and we decided to give the trail a look. The serenity of the woods, the tadpoles in the vernal pond, the tunnels of rhododendron, and the intensity of the rocky terrain were luring and intimidating all at once. After our brief one or two mile trail exploration and a short encounter with some through-hikers, we headed back to our car—which was complete with air conditioning, a cooler of chilled water bottles and fresh orange slices. I couldn’t help feeling a little guilty. 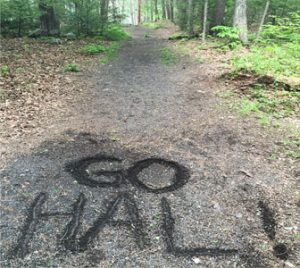 But before we descended the whole way to the parking lot, we scratched a little note of encouragement for Hal into the trail. It was a small gesture of our admiration for his undertaking and an attempt to leave a little trail magic in our wake. We hoped the impending storms would not wash it away and that Hal would see it as he set out the next morning to conquer the remaining 2,000 miles. And he did.

The message was one we can all get behind:
Go Hal!

Written by Andrea Quincy, who along with Rob Quincy (owners/partners at MPI’s agency, Ridge Marketing) checked up on Hal during his journey.