Home Case Summaries If a Tree Falls in the Woods, is the Business a “Going Concern”?

According to the Ninth Circuit, the answer to the question posed in the title of this blog post is “Absolutely.” This case involved a limited partnership owning timberlands that was formed 15 years prior to Mr. Natale B. Giustina’s death. After the family’s lumber mills were sold, timberlands owned for decades within the family’s business entities were transferred to a new partnership in order to effect a family ownership and management restructuring.

The timberlands continued to be held and managed by the partnership and there was no desire or intention to liquidate these assets at the time of Mr. Giustina’s death. In Tax Court, Judge Morrison opined that 25% weight ought to be given to the liquidation value of the partnership, and 75% weight ought to be given to its going concern value, which was determined through a capitalization of cash flow method.

In a brief but acerbically written decision, the Ninth Circuit concluded that Giustina Land & Timber Co. Limited Partnership must be treated as a going concern when valuing a 41.128% limited partnership interest, as there was no indication of any desire by the general partner to liquidate assets. The Ninth Circuit stated, “As in …Simplot …(Ninth Circuit, 2001), the Tax Court engaged in “imaginary scenarios as to who a purchaser might be, how long the purchaser would be willing to wait without any return on his investment, and what combinations the purchaser might be able to effect” with the existing partners… We therefore remand to the Tax Court to recalculate the value of the Estate based on the partnership’s value as a going concern.” 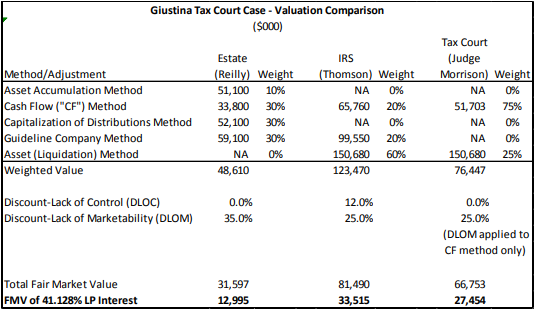 We made the following observations in reading the Tax Court case, among others:

The taxpayer scored a key victory with the Ninth Circuit’s decision. We will now wait to see the revised and final determination of the Tax Court. The Ninth Circuit’s decision was important and appropriate, as it is entirely consistent with the concept that a limited partner in a partnership has no ability to control the entity or obtain access to its underlying assets. Placing weight on the liquidation value of the partnership would ignore such facts and likely overvalue the limited partnership interest by a significant margin. This is not to say that the value of underlying assets is irrelevant. Rather, the focus should be on cash flow, and consideration ought to be given to the discounted NAV method, a widely accepted method where discounts for lack of control and lack of marketability are derived from capital markets and applied to NAV (liquidation value).

It is also important to point out that the Ninth Circuit gave important consideration to the hypothetical willing buyer / willing seller standard. The Ninth Circuit found that the Tax Court’s decision is in violation of this standard when it develops imaginary scenarios involving partners getting together and removing the general partner or pursuing liquidation.

The implications of this case remain to be seen. Nonetheless, this decision re-opens the door for a longheld argument that a minority interest in a minimally profitable, closely held real estate company, where liquidation is either not practical or simply not on the horizon, may be worth a fraction of its pro-rata share of net asset value.

Getting back to the original question at hand, in the case of Giustina, if a tree falls in the woods due to ongoing timber operations, and you are valuing a minority interest, the entity ought to be treated as a “going concern.”